SF to LA: Back to Back Tacos

My last meal in SF was tacos. I hadn’t really thought about tacos or Mexican food in general during my trip. I am from LA, I have tacos on practically every corner (okay, maybe not but it feels that way).

But somehow, I managed to find stomach space for four tacos (!!!) after ice cream at Humphrey Slocombe (!!!). Carina mentioned that Tacos Vallarta and so did Tracy of Battledish during our mini battledish crawl.

I took one look at the grill and decided to get four tacos; carnitas, pastor, lengua and buche. Then I asked what was pansita. I was told it was lamb. I wanted to get that as well but they were out of it.

Overall, I liked the buche but I probably would have grilled it a bit longer to get it crispier. Everything else was fine but nowhere as good as LA street tacos. I did love how the woman was trying to teach me Spanish and also the lovely grilled onions with the tacos.

It wouldn’t be fair to compare Tacos Vallarta to LA street tacos so I test-drove this taco shack near my office in Downtown LA. Taqueria Llamas is bright yellow and the tacos are $1.25. Quite affordable and definitely some of the cheapest lunch fare around. I wasn’t feeling as hungry (!!!) so I only ordered three tacos. I tried to order similar ones I had before but they didn’t have lengua and I didn’t want buche. I got the chorizo, pastor and carnitas. 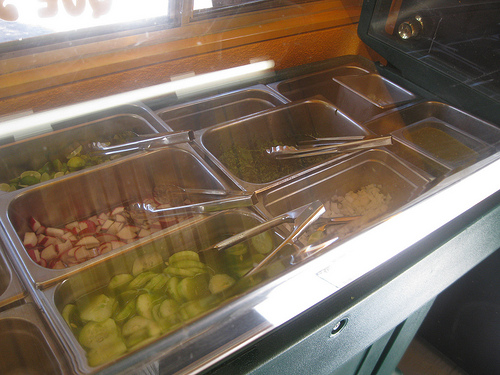 I was so into this salsa bar. Lots of fresh sides to go with my $5.12 lunch (I also got a horchata).

Those sliced cucumbers were hella (ooops, leftover from being in SF for four days) spicy. The pastor was noticeably different from the one I had in SF. I’m used to pastor looking a certain way. At Tacos Vallarta, the slices were much less grilled looking and bigger pieces.

Taqueria Llamas was s’okay. The tacos next door are a quarter less so I’ll be trying that place soon. I will go back to Llamas though. They have mulitas, tortas and burritos for $4. And a mysterious handwritten sign stating they have cheetos with cheese. Does this mean what I think it means? Oh yeah, back in LA and lovin’ it!

4 thoughts on “SF to LA: Back to Back Tacos”