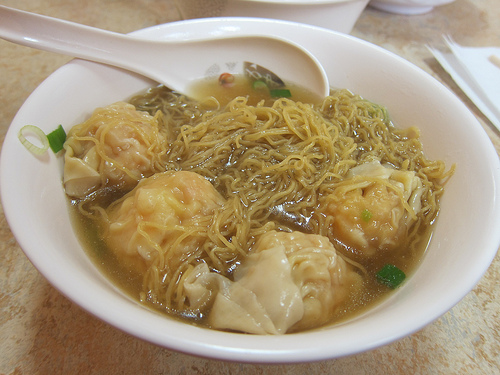 My parents are from Hong Kong which meant I grew up with a particular sense of food and there are some things that just never seem good enough. As a kid, I’d sometimes get a bowl of Peking duck and wonton noodles soup for lunch but it was never “a thing.” Then I went to Hong Kong when I was 10 and I have yet to have such good wontons ever since. I eventually started getting other noodle soups to silently voice my disdain for LA wontons.

Wontons are basically pork and shrimp dumplings. They are generally wrapped in yellow egg wrappers and please do not call it dim sum. Not all Chinese food is dim sum. Sometimes it’s just lunch. My mother ate hers with a splash of red vinegar on each one which I copied to my father’s annoyance. She did not have an elaborate way of removing noodles like Eat Drink & Be Merry’s mom. And my mother for whatever reason does not eat spicy food so no chili oil for us. Actually, she would just get wontons soup. She was anti-carbs way before Dr. Atkins.

My Noodles Partner and I love noodles and try to hit up a few places every now and then but she has turned our mini noodles face-offs to an one-joint affair. Food appreciation has caught up with us. So this day we went to Noodle Boy only and have plans to continue to find the best wontons in LA soon.

After battling one of the worst parking lots in recent history (I beg of you to park on the street), we were seated quickly at the surprisingly large Noodle Boy. Their menu is simple. Decide if you want noodles. If so, what kind- egg, rice or vermicelli? Egg noodles are traditional so that’s what I got. I also like it in soup but some like their noodles dry. Then pick your toppings. You’re here for wontons, right? At Noodle Boy, they come four per bowl. Not bad for $4.75. We also got a side of fish balls which were ginormous, like their wonton counterparts. You could go for a combo of either two or three toppings but I wanted more wontons. They also have sliced beef, cuttlefish balls beef balls and meat balls. Ignore all that. You’re here for wontons.

close up on the wonton

The bowl of noodles came with just the noodles and the wontons. There were no veggies. I guess they figure you can spring for a side dish if you like. But since the Noodles Partner doesn’t eat produce and I wasn’t about to eat all of it myself, we skipped it.

The thing that sets Noodle Boy apart are the wontons as I hinted are enormous. Giant. Large. Simply put, grand. However, grand in taste? Sure, there was a lot of shrimp. But I like a little bit of pork. Hey, remember my parents are from Hong Kong. Seafood and pork is the perfect combination and I see no reason to disagree. It’s my birthright, if anything. So, while this was a good bowl of wonton noodles soup, I don’t think it’s the best I ever had.

Why oh why did my mother take me to Hong Kong when I was 10 and force me to eat street food? I’m forever wontons challenged. I’d probably would have liked this place considering it’s cheap, good and nearby. But that’s not good enough when you’re particular about wontons.

Until the next time I seek another bowl.