It all started in December when I encountered someone who challenged me on the “weirdest” things I ever eaten. The exchange when something like this-

Him– “What’s the weirdest thing you ever eaten? I’ve had OXTAIL!”

Me– “Pssh…that’s nothing. I’ve had bull’s penis soup.”

Me– “And whole pig’s head, rooster testicles, live octopus and I think next I’m going for pig uterus.”

And so I had an event. And the dude didn’t show up. So…maybe he should just stick to chicken. bwowk bwowk..

After a bit of research, I came across Metro Balderas which serves a special carnitas menu on the weekend. 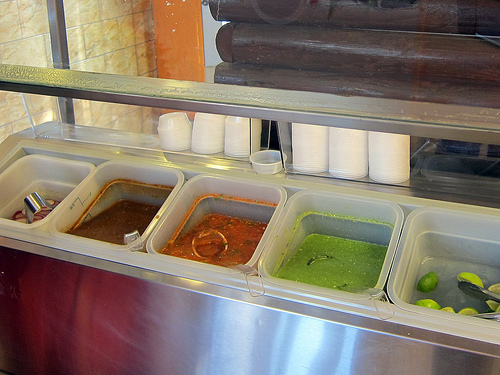 If you ever had street tacos, most likely you’ve had some of these meats unknowingly.

I decided to get one nana, one costillas and one surtida (just to cover all my bases). Metro Balderas does also have “regular” tacos like carne asada (steak), al pastor (pork) and chicken. There’s also suadero (brisket), longaniza (Mexican sausage), tripa (tripe), cabeza (head) and lengua (beef tongue). I’ll have to come back to try their longaniza, tripa and lengua next time.

I also got a huitacoche (corn fungus) quesadilla.

I fell in love with huitachoche years ago and thought it was pretty funny that Metro Balderas includes whole corn kennels in their quesadilla as well. The corn fungus or mushroom as I like to call it is not actually that prevalent in this quesadilla. It’s more cheese and beans.

I got my tacos first and after doing the usual annoying food writer thing of taking pictures of everything, I dressed my tacos with chopped onions, cilantro, salsa and lime juice. Metro Balderas gives you these tacos on “two big tortillas” which you’ll need to pick up all the wonderful bits falling out.

I actually liked the nana tacos but my favorite turned out to be the surtida (everything) which included bits of the snout. I later had a bite of the snout and it’s deliciously fatty. I also liked the pig’s ear for that crunchy cartilage. If you want just meat, I recommend the costillas or the maciza.

The surtida is my kind of carnitas tacos. Everything but the nana seems like a good enough motto as anything.

If you want to have your own tacos adventure, get there early for the pig uterus. They sold out after some of my group ordered them.

Leave a Reply to the minty Cancel reply