Peking Tavern quietly opened a month or so ago. Located in the basement of the same building as the new Terroni Downtown, it’s almost easy to miss if you weren’t looking for it. Once you spy the bright red lanterns, you know you’re at the right door. Go down the stairs to a large airy bar and restaurant. There’s no table service for now so order what you want at the bar. I, of course, prefer to sit at the bar directly.

I’ve now visited several times and my “usual” order now consists of the Peking Manhattan, dumplings and the beef noodles soup. I have heard of other dishes as the menu changes daily but for now, these are my favorites.

Cocktails were masterminded by Cari Hah, formerly of Neat and now at Cole’s. About 8 months ago, she mentioned working with a couple of gents opening this bar and I should have realized right away the significance of meeting the Peking Tavern owners then. I probably would have been more anxious awaiting its opening. I’m always looking for great downtown options for lunch but will settle for dinner and cocktails for now.

The Peking bitters are made especially for Peking Tavern by local bitters maker, Miracle Mile. The Peking Manhattan is a tiny bit bitter which is good- it definitely reminds me of what bitters were originally meant for- stomach ailments and other medical uses. And so this connection to the bitter soups I had to consume as a kid amused me greatly. I still probably wouldn’t love those bitter soups but maybe I’d appreciate them more now that I enjoy bitters and amari.

Peking Tavern possibly is the first restaurant to serve a beef roll in downtown Los Angeles. Of course I love beef rolls, those Chinese “burritos” or wraps of beef and cilantro. To address the pricing of this gastropub, I must first say this is not the San Gabriel Valley where competition is fierce. There, I can get a huge beef roll for probably $5. Charging $7.50 for what seems to be about half what you’d get in the SGV seems initially like a bad deal but when you think of the terms of convenience, it’s not a bad premium.

That said, I was surprised the beef roll was actually pretty good. The wrapper was flaky and not greasy. The beef was of good quality. I’d probably do less sauce and wrap the thing just a bit tighter but overall, I’d order this again.

What I knew of baijiu seems to match what I thought of the monks depicted in Hong Kong films. They were always swilling something from gourds yet amazingly were kung fu masters. If you can kick ass on that fiery clear spirit, it can’t be that bad, can it? I didn’t actually taste baijiu until a couple of years ago.

At Peking Tavern, you can find the Chinese spirit in a few cocktails including the White Tiger soda. The drink reminded me of those tiny yogurt drinks you get by the dozen. Tart and refreshing, this would be a great drink with the food. 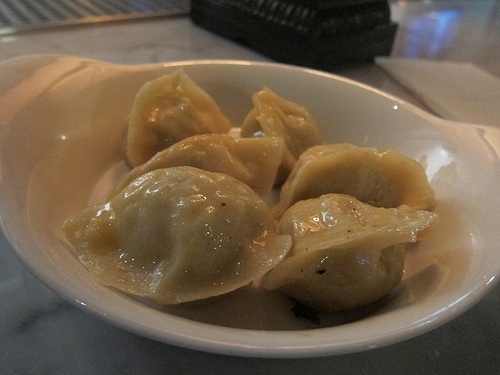 The first night I swung by, they were doing special shrimp and pumpkin dumplings. I found the filling to be slightly inconsistent. One dumpling would have a lot of pumpkin and the next had way more shrimp. However, they were good particularly with the chili oil and a good dosing of black vinegar. Although I generally prefer steamed and panfried dumplings, I liked the boiled ones at Peking more. 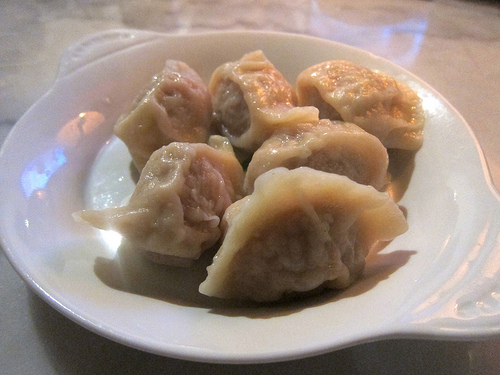 My favorite dumplings were the boiled pork dumplings. I’ve also tried the seafood (not shown). The pork ones have been consistently juicy. Gluten free folks rejoice because Peking Tavern occasionally has gluten free ones. They also have vegetarian dumplings.

In the corner of the room when you first walk in, there’s a glassed in room where you can see a worker making dumplings and noodles. I haven’t been able to catch any other noodles but the beef soup noodles but I’m hoping when Peking eventually opens for lunch, I’ll be able to explore an expanded menu. 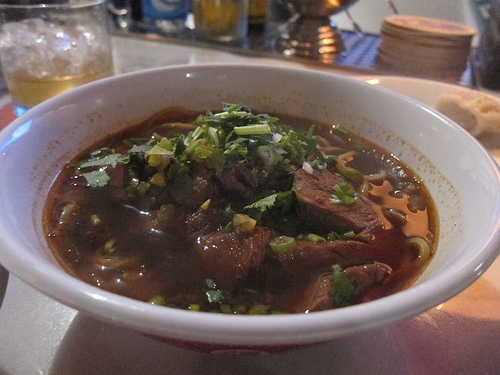 Niu Rou Mein or spicy beef stew noodle soup is one of those other obsessions noodleheads crave. I grew up eating the Northern Chinese version (versus the Taiwanese version) and liked it but never pursued the perfect bowl since I’m perpetually chasing other types (boat noodles, wonton noodles, pho, ramen etc). Still, I’m down for a good version of any soup noodles and I was charmed by Peking’s version. Some days my bowl seemed to have more pickled bits (win) and some days more beef (double win) but the broth has remained consistent. I add a good spoonful or two of chili oil to the bowl to enhance the already umami-fied bowl.

As the evenings grow longer and cooler, this is the bowl I’m going to crave. 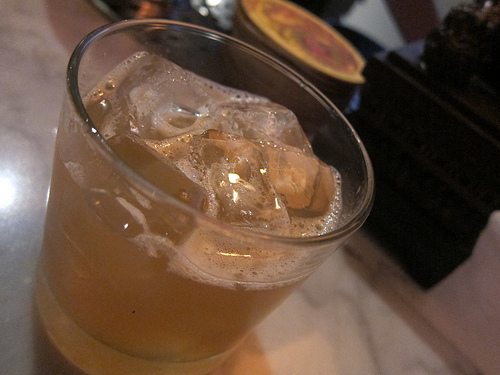 A couple of other drinks have caught my eye. I tasted the Peachy Keen last week and also thought this would be a good drink with the food. The slight sweetness would tame all the spice from dumplings and noodles. Or just enjoy the cocktail while looking around the calm room filled with orchids, white subway tiles and Chinese lamps.

For an after dinner drink, I recommend the Peking Coffee. It’ll either remind you of The Dude or your secret favorite cocktails from college. It is the perfect dessert cocktail. Or if you’re me, you’ll just have more dumplings and a Manhattan. Maybe an Old Fashioned.

I can’t wait to see how Peking Tavern evolves as the neighborhood catches win of this modern Chinese gastropub. Cocktails with dumplings and noodles? Perfect.