Him: “Want to have lunch at Providence?”

Me: “I thought it’s not open for lunch?”

And then I was ashamed as a native Angeleno and foodie that I didn’t know Providence was open for lunch on Fridays. It took an out of town guest to point it out.  In London, I met food blogger EuWen, “A Rather Unusual Chinaman” and he happened to be in LA after I got back. Here’s his take on our meal.

I actually was in San Diego for the SonyFoodie retreat and drove back just in time to have lunch. The first shot is done with Sony Cyber-shot WX9.* They gave us four amuses- a gin and tonic gelee, screwdrive gelee, a gougere and the most wonderful parsnip soup. Oddly, I had been craving something like this root vegetable soup. I’m a foodie. I have odd cravings.

We started with one appetizer from each of the sections; the cold Maine Lobster and the clam fritters. The lobster was really good. I loved how some of it was in an egg crepe. The nori creme fraiche went well with the naturally sweet lobster. The clam fritters were served with a yuzu kosho mayo. The actual fritter part was like the best doughnut- soft and perfectly fried. The tiny tender strips of clam were perfect.

For our mains, I actually ordered the large portion of the spaghetti alla chitarra with sea urchin (uni) from the appetizers list. EuWen had the decadent foie gras ravioli with shaved black truffles. Our server said the pasta was one of his faves. I could see why. The uni were like little soft clouds of umami floating about. 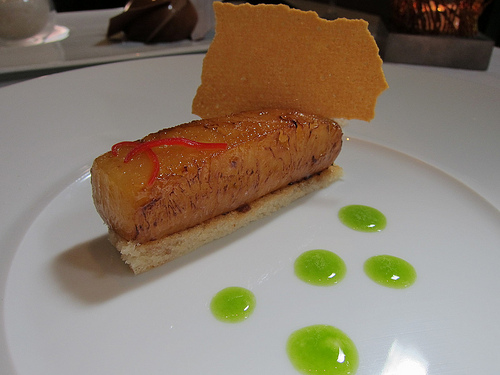 Two apps, two mains, two desserts? Yep, we’re rolling with it. Because it was lunch, they didn’t have a bartender. They could have made other drinks but none of their famed cocktails. Otherwise it would have been a two-cocktail lunch as well.

E’s dome of Brazilian coffee was really good as expected. One of these days, I’d like to try their dessert tasting menu. I went with the more off-the-wall pineapple. The long chunk was roasted in white soy caramel. It was served with an almond financier, banana ice cream and candied jalepeno. It was highly unusual and very tasty. However, I’m not sure it’s something I’d crave. I  keep thinking about the toasted walnut and Scotch in the dome dessert.

The great thing about lunch at Providence is when you leave, you have the rest of the weekend to look forward to. Hurray for lunch on Fridays.

** only the amuse picture was taken with the Sony WX9- the rest are from my regular Canon S95.

15 thoughts on “Lunch at Providence”