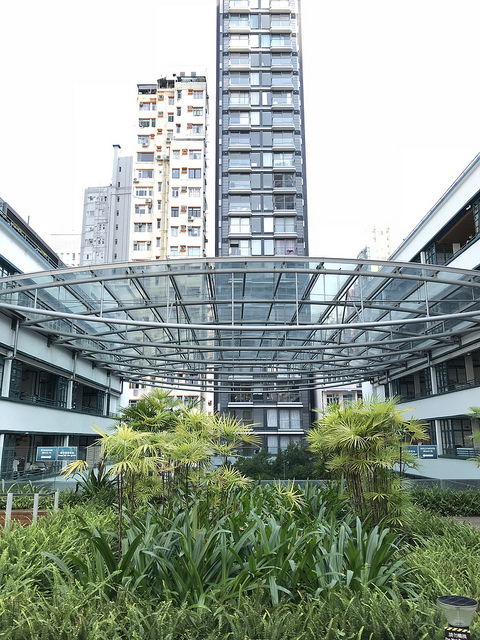 On one of my last couple of days in Hong Kong, I headed over to PMQ in Central to check out all the artist studios. PMQ were the former quarters for married police officers and their families. The old apartments have been turned into workshops and stores for artists. I saw pottery, clothing, painting, classrooms, coffee and sake shops. I found some unique jewelry that I had to have. I also had lunch and spent some time at the Korean Cultural Center all at PMQ. 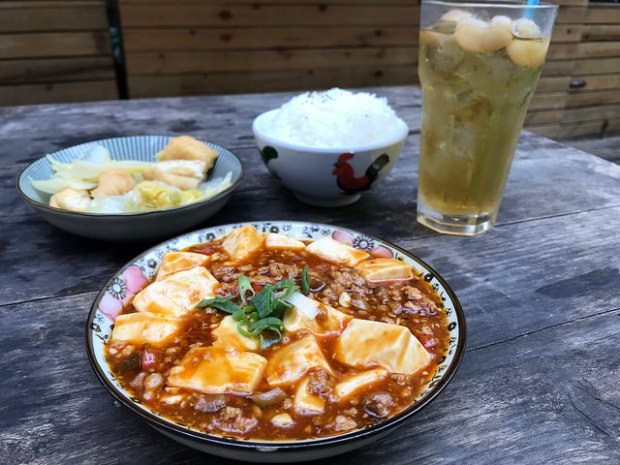 As I tried to find reliable wifi all over Hong Kong, PMQ allows users on 20 minutes at a time, 3 times a day. I checked into my flight as I waited for my lunch to arrive. I got the spicy mabo tofu at Sohofama which had a good lunch deal that included a main dish, a side and drink. I also added some dumplings to my order (not shown).

I was really happy with my lunch and was starting to feel a bit bummed out I was going to miss out on all the fresh veggies when I get home. And I’m glad I had a filling meal because I then spent 4 hours at PMQ! 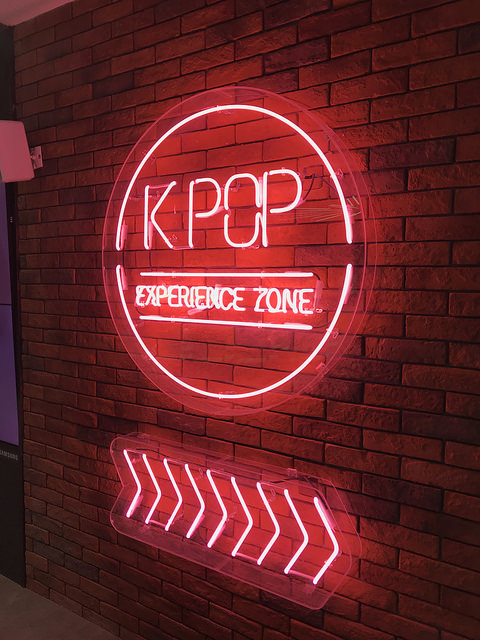 As mentioned, there’s the Korean Cultural Center at PMQ. There were displays about food, traditional clothing and K-Pop. If I lived in Hong Kong, I’d attend some of the film programs. 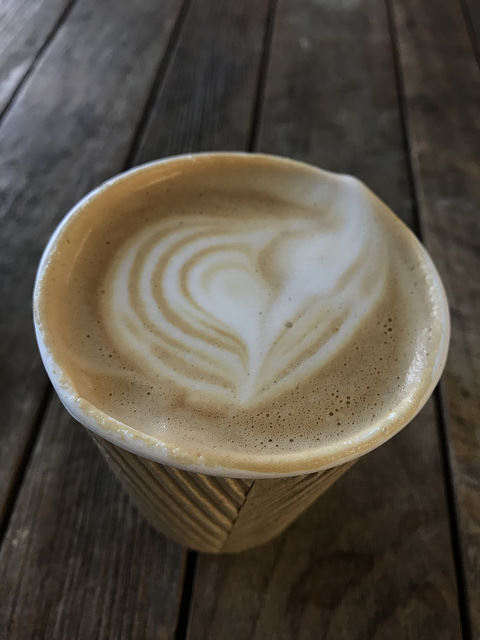 All this walking made me realize I needed a break! I stopped at Cafe Life, a Japanese owned coffee shop at PMQ. You could tell the Japanese influence with the matcha pastries. And I loved the idea of all the Asian flavors in general for the sweets.

I had a flat white (it became a habit!). I discovered the lovely latte art when I popped off thelid to let it cool a bit before sipping. It was probably my favorite flat white of my trip. 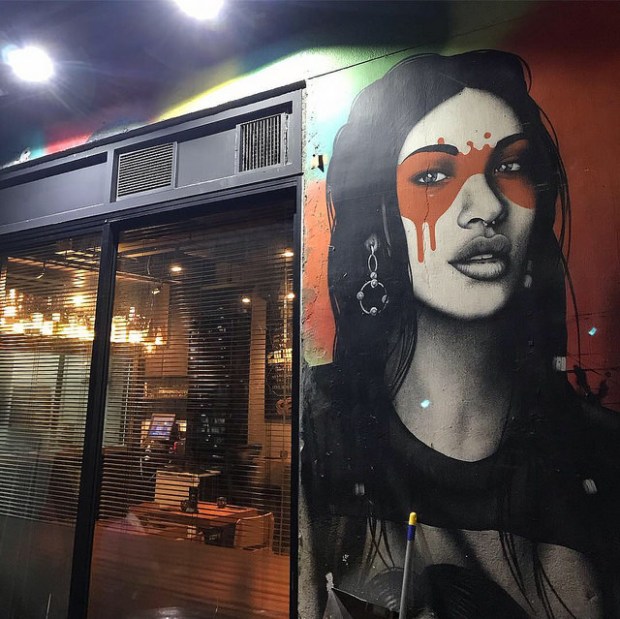 After a whirlwind tour of Sake Central and a couple of drinks at The Old Man around the corner, I headed down the road to Kau Kee for dinner. 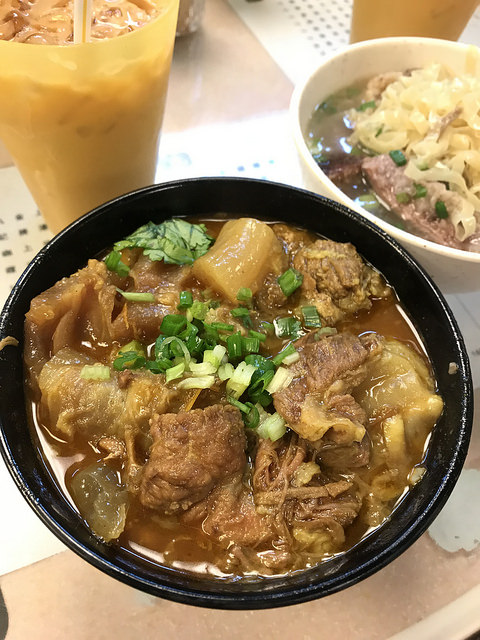 I had originally wanted to do a dai pai dong for dinner. That is, go to a street food vendor. But I thought that might be a little much for myself and one other person. We decided on Kau Kee because they’re famous for their beef brisket noodles. And they have a Michelin star!

Even though we got there around 6:30 p.m., the line was super crazy long. It went almost down the block. It did move though. And after about an hour, we were seated with three others (and they weren’t together). This was the communal table dining life of Hong Kong. Get in, order, eat fast and book it out of there.

We got two bowls and one veggie dish. I really liked the curry beef brisket and tendon bowl. The tendon was the best part. The pieces were all very tender. 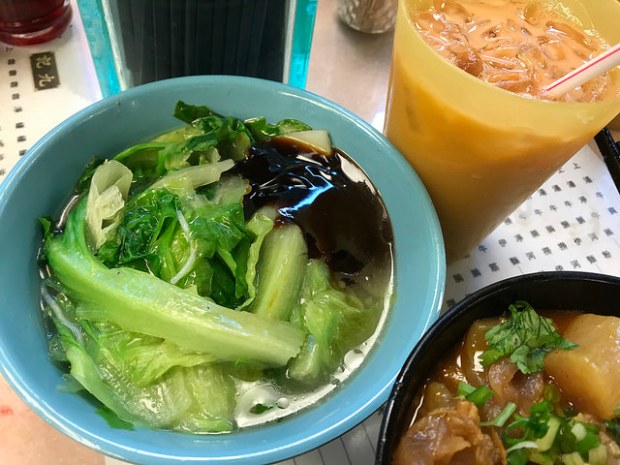 I was almost a little surprised how good the milk tea was. The greens turned out to be lettuce. And of course with a bunch of oyster sauce. The greens were much needed. 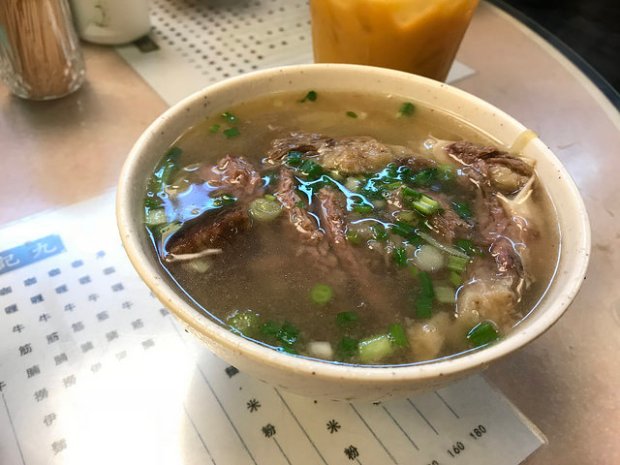 We also got a regular beef brisket bowl with yee mein. I liked it though the broth was on the saltier side.

Was it worth an hour wait? Yes and now. I’m glad we tried it but no, I wouldn’t wait again. Or I’d go during an off time.  Well, at least there was street art to look at during our wait (shown above). 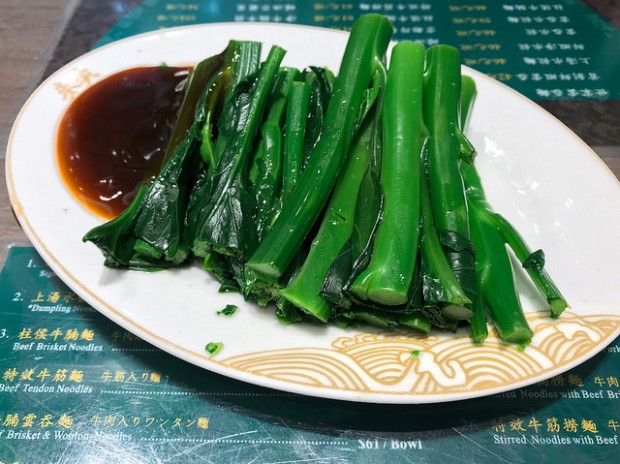 The next day I started my Michelin day at Mak’s Noodle. I heard so many great things about their wontons. In addition to wontons (and I also got tendon), I got some veggies. I know I keep saying this, but I will miss the slightly overcooked veggies of Hong Kong and their liberal dousing of oyster sauce.

At Mak’s the veggies are translated as “kale.” I say these are more Chinese broccoli  (gai lan) but they are occasionally also known as Chinese kale. 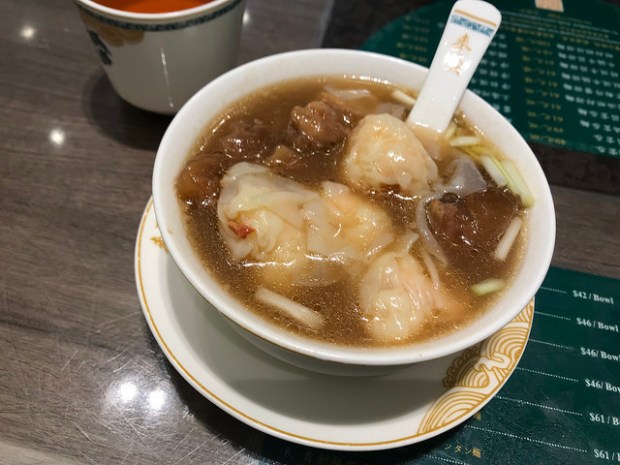 I didn’t get noodles with this bowl because I was going to go across the street immediately for more wontons. I really liked these wontons and the tendon was pretty good (not as good as Kau Kee’s).

I had planned this mini-crawl because of the proximity of the shops. There are other Mak’s but this one seemed the most popular as it’s known as the original shop. I had gone at an off hour so I luckily didn’t have to share a table. And the food came out lightning fast. They even refilled my tea once! This is considered really good service for Hong Kong. 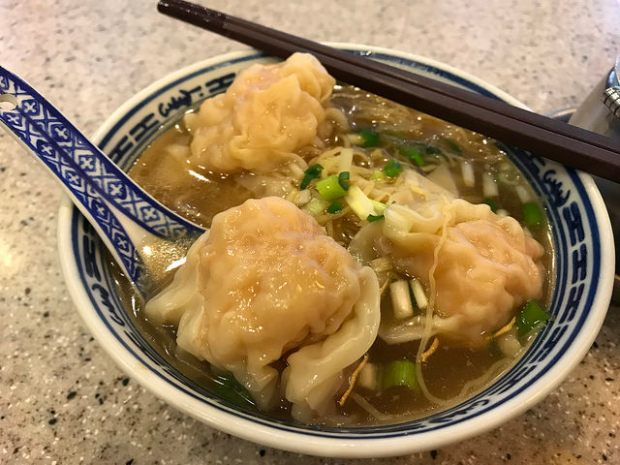 After Mak’s I darted across the street to Tsim Chai Kee. The difference between the two were palpable. Mak’s had an air of refinement while it wasn’t quite so elegant at Tsim Chai Kee. Still, all that matters is the food, right? And they both have one Michelin stars!

I ordered the wonton noodle soup here. You get three large wontons. Ah, the shrimp were very good. And I loved the bouncy noodles!

I’d definitely do the wonton two-fer again. And actually I liked the rustic vibe at this shop. They took my order as I was walking in — which meant I didn’t look over the menu. If I had to do it again, I would have ordered the 3-item combo noodles which are wontons, fish balls and beef noodles. There were a couple of women who weren’t ready and the waitress sat at their booth until they ordered. I loved that! It reminded me of Ed Debevic’s and all those sassy waitresses. 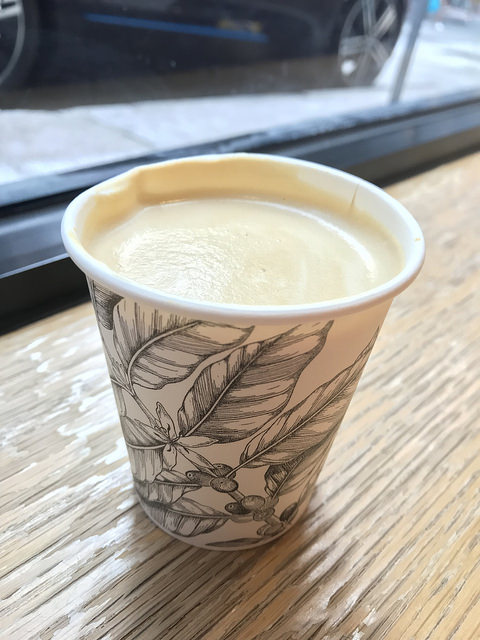 another day, another flat white

I ate 8 wontons, tendon, noodles and veggies in about an hour so I needed a coffee break before heading to my next Michelin spot. I stopped into The Cupping Room for a flat white. I was disappointed to find no latte art but the shop was also closing at 5 so I had about 10 minutes to down it (and use their wifi to check google maps).

It was a tiny bit too milky for me but it was a convenient stop after my wonton marathon. 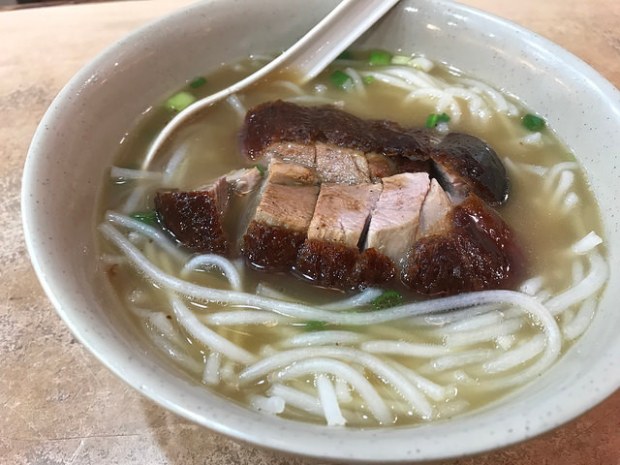 After coffee, I headed around the corner to Yat Lok, currently one of the best roast goose restaurants in Hong Kong. They like a few other hole in the wall spots has one Michelin star. It was now after 5 p.m. so the shop was half full of early diners. Still, I had a (small) table all to myself.

I wanted a roast goose leg and had practiced my best Cantonese to order this with lai fun (noodles). However, they were out of leg and offered me the breast. It was still so velvety rich and delicious. I haven’t had roast goose since I was a kid and I immediately missed it and wished restaurants in LA would do roast goose. At least during Thanksgiving! If they can roast turkey like they do duck, they can do a goose (or geese, really).

I’m glad I didn’t miss this stop but wished I had more time (and stomach room) to get to another roast goose spot. 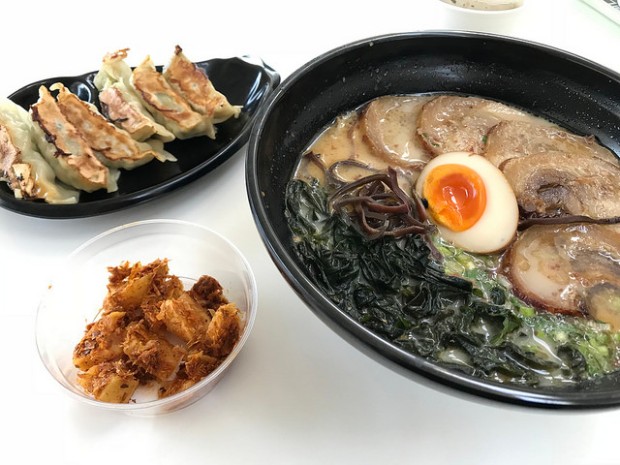 ramen at the airport

For my last meal in Hong Kong, I stopped by the Ajisen ramen at the airport. I actually wanted to find dim sum or maybe wonton noodles. But as it were, I was by a food court that had Popeye’s chicken, McDonald’s and this ramen shop, Ajisen. We have those in Los Angeles so I wasn’t initially keen about it but then I remembered it should be better than airline food, right?

And it was! And there was just so much of the ramen! I couldn’t finish it! I loved the pickles. And I added gyoza to my order and those weren’t bad.

I’m also going to miss the eggs in Hong Kong. I remember when I was around 10 and saw eggs with those orange yolks… I later learned truly free range chickens that eat bugs will have those colored yolks. The pale yolks we see are the result of chickens eating mostly grain.

This shop is open 24 hours so if you’re ever at the Hong Kong airport, you can grab a bowl at any hour.