Last October, I hosted a Hot Bartenders Crawl in Downtown Los Angeles. It was girls only though my gay posse tried to get in on the action.

It was too easy to go to WeHo. I wanted to visit my favorite bars in DTLA and have real cocktails, not booze and glucose water in plastic cups. Not that all WeHo bars are like that but I think most people go to those bars to watch the go go dancers and not for the drinks. Or at least I do.

We started out at Bottega Louie where I had my favorite Ward 8 by hot bartender, head barman Jamieson Rhyme.

My friend tried their Manhattan which after I sampled was pretty darn good. Maybe not as strong as Seven Grand across the street but pretty darn close. 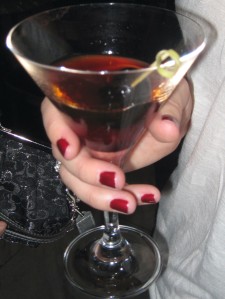 We trooped over to Seven Grand where I had one of my three usual drinks there, the whiskey sour. One of my friends had a vodka tonic which she proclaimed was all vodka so she liked it.

I have not run into a bad bartender at Seven Grand yet but George is my fave.

A friend of mine was sticking to Manhattans that night. This was the first time I’ve seen it served in a frosted glass.

Usually 7g serves the Manhattans in a traditional cocktail glass. I’ve been back several times since and haven’t seen this frosted glass. Maybe they gave her a special glass in honor of our Hot Bartender Crawl. Teehee! 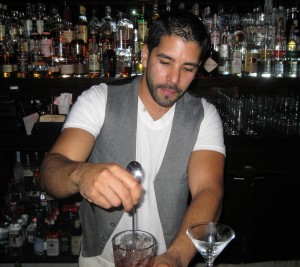 hot bartender at the Association

I am rather attracted to my old-timey barkeeps and their sexy vests! 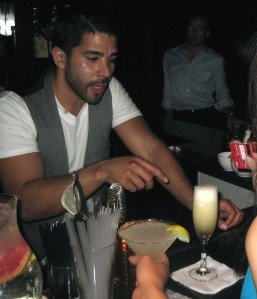 drinks at the Association

See that champage glass? That’s their version of the whiskey sour. It’s so light and delicate, I had a hard time believing it was whiskey.

It’s probably a toss-up which bar is my fave in DTLA but Association plays better music than Seven Grand.

Our final stop this night was the Varnish, the tiny bar inside Cole’s.

This was the only bar this night I hadn’t been to before. At the time we arrived, there were 7 of us and they were allowing 6 and under per party so we had to wait. By the time we actually entered, it was the end of the night and so our party had dwindled down to three.

Chris Bostick at the Varnish

I went with the Bartender’s Choice which is a neat drink all for you. You describe what you like to the bartender and he comes up with something tailored for you. I have now been back several times, always asking for bourbon drinks. This particular night, I got something called “Fancy Free.” A simple cocktail of bourbon, maraschino liquer and bitters. It was delicious.

My friend who must have been sick of Manhattans by now got the hot buttered rum. 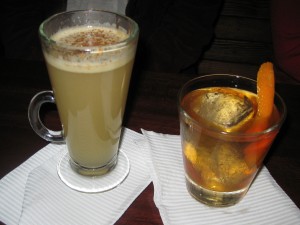 Unfortunately, the rum wasn’t to her liking. It was way too buttery and not sweet. Much like hot melted butter. The bartender fixed it for her readily.

So when’s the next Minty Hot Bartender Crawl? Stay tuned in February but a little birdy says Santa Monica is looking good!